It is not surprising that some land developers take advantage of the opportunity to immortalise themselves when naming streets. perhaps a little more unusual is the way some have chosen to honour their second forenames. 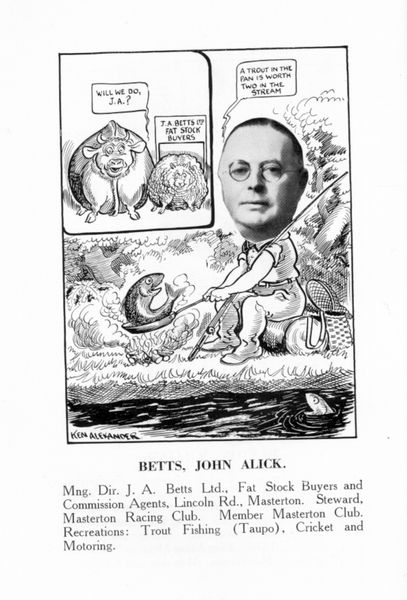 When the Betts estate in South Road was subdivided to form two new streets in 1960 it was only natural that one of the streets should be named after the owner, prominent local body politician and businessman, John Alick Betts.

Betts developed a successful meat exporting company, and served a number of terms on the Masterton Borough Council. He was the founding chairman of the Masterton Licensing Trust, and was active in a number of sporting organisations. He was President of the Masterton Racing Club, and a very successful racehorse owner. He died in November 1959. Betts Avenue and Madden Place were formed out of the land behind his home.

J.A. Betts’ son Tony, who honoured one of his father’s long term employees when he named Madden Place, carried out the subdivision. Bob Madden worked as a drover in Wairarapa for 30 years, having previously been a farm manager, and running his own property. He worked as a drover until he was 88.

Pic: J.A. Betts, meat wholesaler and land developer, from a cartoon in the 1940s. 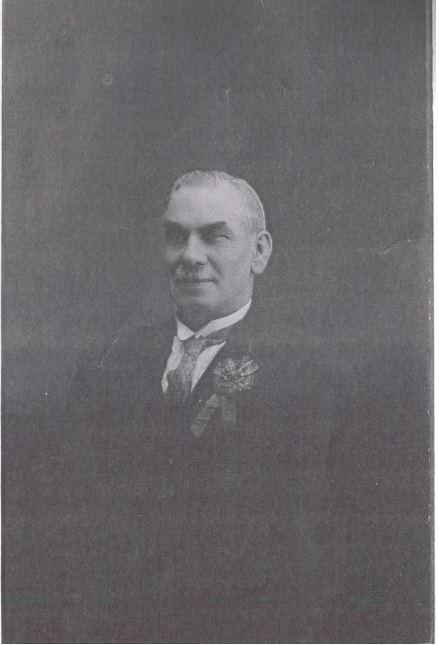 The second-name principle for naming streets seems to have also been followed when two streets in the Cockburn Block were laid out in 1905.

The streets, which formed a loop from the bottom end of Cockburn Street through to the middle of South Road, were named Millard Avenue and Andrew Street. Millard is the middle name of the primary developer, Robert Millard Spiers.

Spiers was a Christchurch land agent and developer who, with his partner J. Wilson, bought the land to create a new suburb for Masterton.

Robert Spiers was of Scottish ancestry and had come to New Zealand via Australia, where he had been converted to the Salvation Army. He was to remain a practising Salvationist for many years, and was also very active in the Caledonian Society. His daughter was a New Zealand tennis champion.
Andrew Street was named at the same time and is difficult to explain. Cockburn Street was named after Andrew Cockburn so it may be named after him, or there may be a connection with the family of developer J. Wilson, as yet undiscovered. 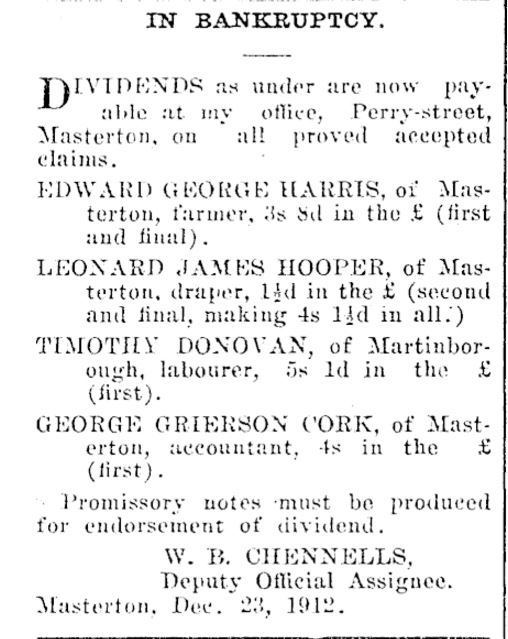 Edith, Oak, Grierson, Paul, Colville and Carverthen Streets were named in a very unusual manner. They were formed in the early years of the 20th century when the Chamberlain farm called ‘The Oaks’, was put on the market. Part of the land was sold as a small farm, but a consortium of developers bought the bulk of it, planning to create a new subdivision.The consortium was described in the minutes of the Masterton County Council as Cork, Hoffeins and Greenlees. (The Masterton County Council was administering this piece of land at the time although it had once been, and was to again be, part of the Masterton Borough.)

Finding the name of the syndicate that developed the land proved to be the clue that enabled us to crack the method used to name these streets. George Cork was a local administrator with an entrepreneurial flair. He managed the local theatre, as well as working in lawyers’ offices. Later, having left Masterton, he became an accountant. Examination of the electoral roll showed that his middle name was Grierson. Examination of the births register confirmed that just before the streets were constructed his wife had given birth to a daughter duly named Edith Grierson Cork.  Hence Edith and Grierson Streets, the first named after his daughter, the second after his own middle name.  Unfortunately, Cork suffered a bankruptcy in 1912. 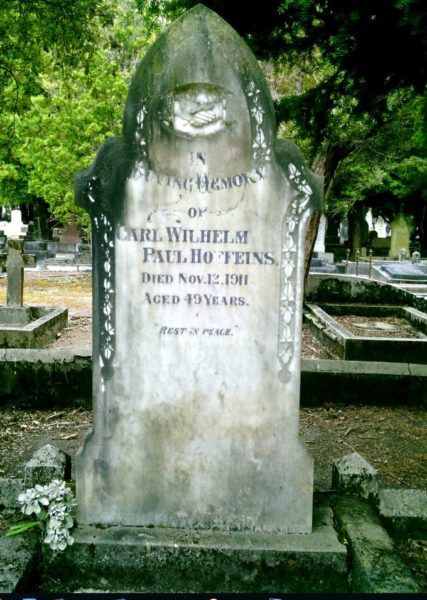 Many of the streets in the Upper Plain area are named after the second names of the developers. The Hoffeins member of the syndicate that built the subdivision turned out to be an Akura Road dairy farmer, Carl Wilhelm Paul Hoffeins - thus Paul Street.

Partner Greenlees proved to be harder to track down. Greenlees is an uncommon name, and the only reference we could find to Mr Greenlees, apart from the reference to him being part of the syndicate, was a brief mention of him as having subscribed to the Masterton Hospital. A long search through electoral rolls finally found Charles Colville Greenlees living in Hokitika. Hence Colville Street.

It seemed obvious at first that this street was named after a Welsh village, and it appeared that all we would have to do was take a look at a world gazetteer. The supposed Welsh connection seemed to be confirmed by the naming of a nearby unformed street as Clanmorgan Street.

The first of these was a plan put out to advertise the sale of land in these sections, and it showed Carverthen Street as ‘Albert Street,’ with the unformed Clanmorgan Street shown as ‘Victoria Street’.

The second map was deposited with the Survey Department, showing the streets with their Welsh names, and signed by the surveyor D.P. Davies.

It is clear why Albert and Victoria could not be used for streets in the subdivision. The names had already been allocated to Wrigley’s subdivision in town. It seems likely that the surveyor himself came up with the two new names.

The surveyor turned out to be Wellington-based, and examination of the electoral roll showed him to be David Picton Davies.

The middle name Picton turned out to be the key to solve the mystery.

Sir Thomas Picton, after whom both the New Zealand town and the Wellington surveyor were named, was a Welsh-born soldier and administrator. During his governorship of Trinidad he was accused of cruelty to the population, a charge he was cleared of. He served under Wellington, and was shot leading his second brigade in the charge at Waterloo. A large statue was erected in his memory in his hometown, Carmarthen.

Research has uncovered that David Picton Davies was also a native of this town, born there in 1835.  It seems that Carverthen Street is a typographical error and that, although unable to be proved after 120 years, the street should have been named Carmarthen after Davies’ hometown. 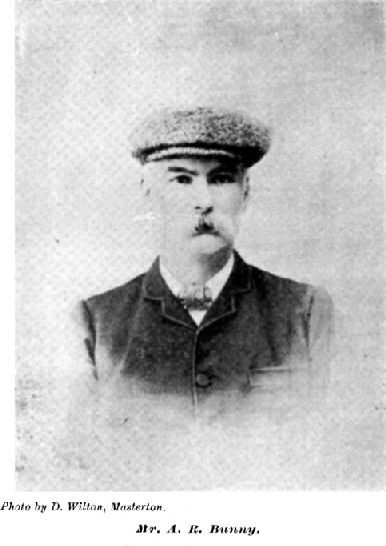 Arthur Bunny was a well-known Masterton lawyer, and son of a prominent early politician Henry Bunny. Arthur Bunny was born in England and came to New Zealand as a child. He trained as a lawyer in Wellington and, once qualified, established a practice in Masterton. He was involved in the Catholic Church and in musical groups in the town.He was an enthusiastic tennis player, his large house in Worksop Road having tennis courts nearby. He was also keen on viticulture and had an extensive vineyard on his property. When he subdivided his land he named one of the streets Bunny Street.

Another he named McKenna Street, after his friend and long-serving Catholic priest Monsignor John McKenna. Monsignor McKenna was one of two Irish brothers who served as priests in Wairarapa, and was well-known for his sporting prowess, excelling at both football and tennis. He is credited with playing a large role in bringing the nuns of the Brigidine Order to Masterton.

Pic: Arthur Rigby Bunny, Masterton lawyer, who named a street after himself. 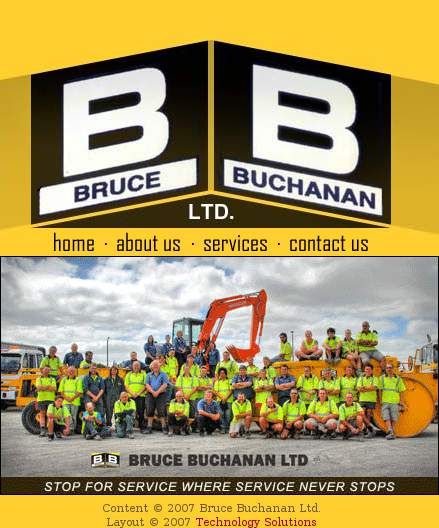 Wright Street, which was formed in the early years of the 20th century, ran north from Bennington Street, now called Cornwall Street. It is named after George Wright, a Wellington civil servant who was part of the group that developed the block. They also named Tararua Street, supposedly because of the view of the mountains from the street.

Buchanan Place was named by, and for, the developers of the small street in Solway, the contracting firm of Buchanans. The firm was started by Bruce Buchanan in 1949, and grew to be a substantial contracting company in Wairarapa.

Pic: Buchanan Place was named after the contracting firm based there. 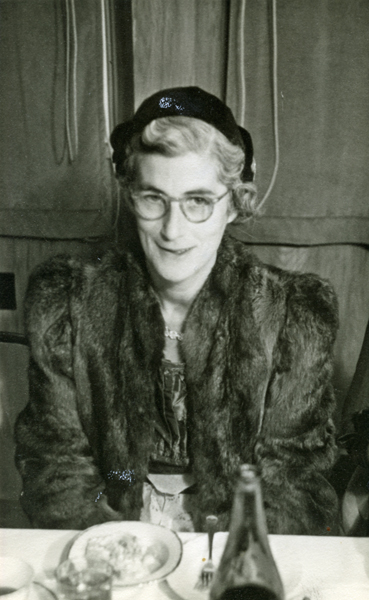 Joan Allen was the daughter of Isaac Allen and his wife Susan Russell. She was six weeks old when her parents bought this land in Upper Plain. Following their deaths she farmed it on her own account for 50 years. She was also  a nurse, co-owning Glenwood Hospital with her sister for many years. The street was named in her honour in 2004. 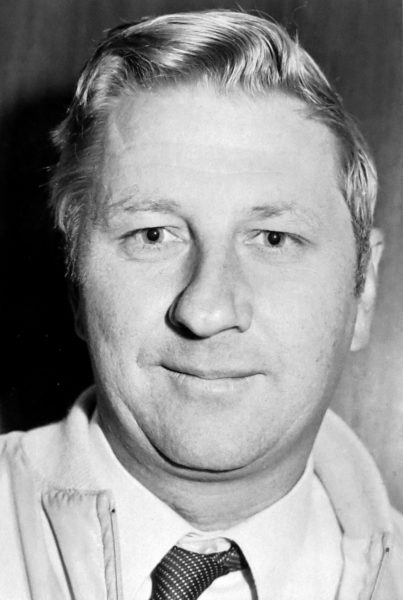 Norris Way was named in 2004 to commemorate the family of developer George Norris. His grandfather Frederick Norris was born in Kent, England, and came to Masterton about 1910. A businessman, he was also involved in many community organisations. The development is called Elmsted Estate in honour of Frederick’s home village, and its streets are named for English timbers. 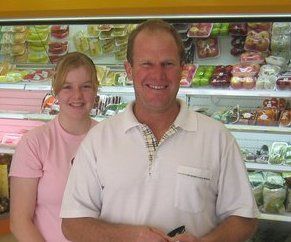 When Wycliffe “Wick” and Estelle Gimson started a large subdivision in the bare land between Solway Crescent and South Belt they named the first street after Wick’s family. 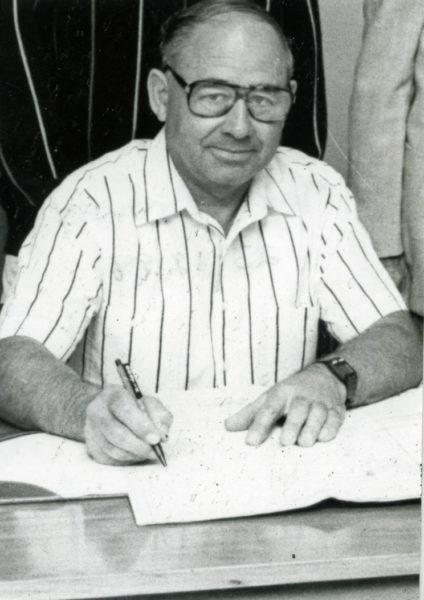 This new street which runs off the end of William Donald Drive has been named after the developer and long-term Masterton businessman Mervyn Brown.  He has been a builder for all his adult life and been active in many community initiatives, more recently at Henley Lake, including playing a leading role in the establishment of the Mens Shed.

Pic: Masterton businessman Merv Brown has been involved in many community projects through his involvement with Rotary Masterton.

Roger Southey developed this subdivision on the Opaki Plains, just on the left as you leave Masterton.  The subdivision streets are lined with oak trees, and the main road looks straight to the Tararua Range, a view reminiscent of the Kashmir area of India.  There are two further streets, one to the left named after Southey’s father McDonald “Mac” Southey, a local farmer and stock trader, and one to the right named after an ancestor on his mother’s side of the family, Roger Renall.