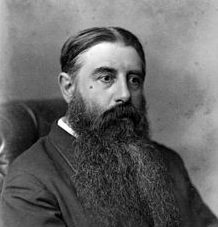 New Zealand has had few more charismatic leaders than Sir Julius Vogel. Vogel was blessed with great imagination and political skill but he was an impatient man, and careless with details of his policy. His tenures as Colonial Treasurer and as Prime Minister were marked by extensive overseas borrowing to build up the country’s infrastructure.

In Wairarapa, Vogel’s policies led directly to the opening up of the Forty Mile Bush and to the influx of Scandinavian migrants.