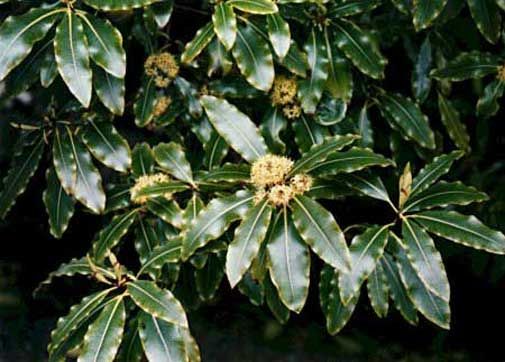 A recent subdivision of the old Totara Drive School site, a circular road entered from Rimu Street, has been named after the tree known to pakeha New Zealanders as the lemonwood, Pittosporum eugenioides, but known to Maori as tarata. A quick growing tree with attractive yellow flowers in the spring, the leaves have a slight lemon scent when crushed.

High on the top of the golf links hill  a new street has been formed at the end of Manuka Street, and named after the estate the land was subdivided from. ‘Ardsley’ was the home of Charles Beetham, one of the Beetham brothers who established Brancepeth Station, and named after a village in Yorkshire with Beetham family connections. 'Ardsley' farm later became famous as the thoroughbred stud of Jim Wallace.

Opaki Meadows Drive is a small private roadway leads off SH2 into a small subdivision on the banks of the Opaki Stream, overlooking the recreation trail that leads from Fourth Street up into Milford Downs.

Pic: The tarata, or lemonwood , has attractive cream flowers.