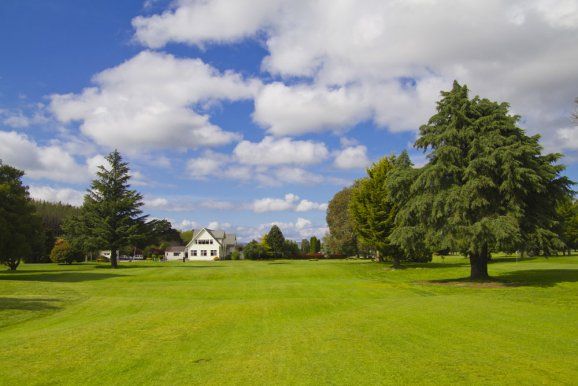 One of the first stations in the Masterton area owned by W.H. Donald was called Manaia. According to local Maori the name derives from a Wairarapa name given to a medicinal shrub, similar to a koromiko, although the term also means a grassy plain. Manaia Road takes its name from the Maori name for the district. Ihaia Whakamairu, the son-in-law of Te Retimana Te Korou, involved in the sale of Masterton, lived in the area.

The Donald family also own land on the banks of the Waipoua River, land that includes the site of the old Kaikokirikiri pa of Te Retimana Te Korou. This farm is called Mahunga, its name deriving from the Maori word for the top of the head. Mahunga Drive leads from the end of Oxford Street to the Mahunga Golf Course

Pic: Looking down the fairway at the Mahunga Golf Club's headquarters,.