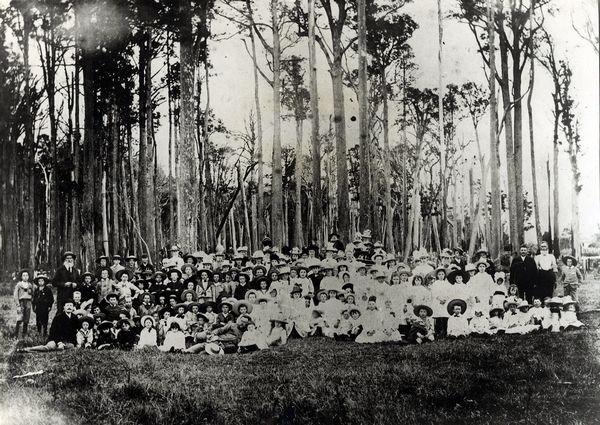 The Makoura Stream rises to the west of Masterton, the main tributary being the Makakaweka, named after weka birds made tapu by a tohunga. Various other streams (Waimateatea, Waipokaka, and Ngaumutawa) join it before they take the collective name of Makoura.

This has been a contentious name in the past, as various authorities have argued whether the name should be Makora or Makoura. "Ma" means stream, and "kora" means seagull, while "koura" means freshwater crayfish. It seems clear the stream should be Makoura.

When the new secondary school for the east side of Masterton was named Makora noted historian Keith Cairns protested strongly that the name should be Makoura, to no avail.
Eventually the school community decided that the name was wrong and it was changed to Makoura. The street that Makoura College is sited on remains Makora Road. This name was once applied to Johnstone Street, as it led to the district of Makora/ Makoura.

Pic: Elkin's Bush at Makora Road, was a popular picnic site in the 1890s.