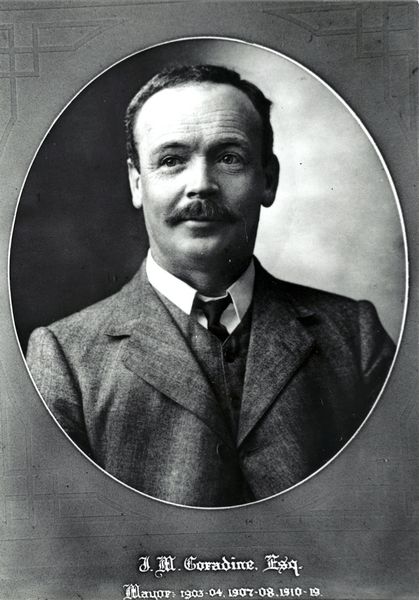 J.M. Coradine was Masterton mayor for the periods 1903-04, 1907-08, and 1910-19. Coradine was a builder with a keen interest in religion and education. One of many Methodist mayors, Coradine was a partner in a construction business in Queen Street, and built many of the town’s major buildings during the early years of the 19th century. He was a lay preacher in the Methodist Church.

The street named after him has had a variety of names.

It was originally the western end of Perry Street that then ended at Lincoln Road, having taken a left turn at what is currently Coradine Street. There was no road from Perry to Cole Street.

Later, when Perry Street was extended further west to join up with Villa Street, the small branch road from Perry Street to Lincoln Road was called Timothy Street, supposedly after Timothy Kelliher who lived in the area.

Later still, when the street was extended from Lincoln Road to Cole Street the whole street was named after J.M. Coradine.

Pic: J.M. Coradine was one of Masterton;s many Methodist mayors.